From Plerin we drove north westerly (skipping more familiar coastal ground) to the coast by Plouha. Here we linked up with the ‘Cirquits des Falaises’, which was very pleasant scenery. Falaises being cliffs in French. 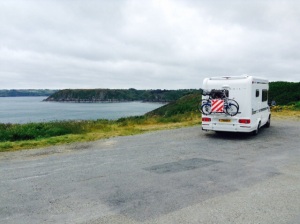 We stopped for a Greek salad (I tend to keep all the ingredients on board for this easy, quick and tasty dish) before continuing our touring.

The weather at this point was pretty nice really. All that drizzle gone, making for good visibility of the scenery. Winding roads (though plenty wide enough for a Motorhome) swathed in yellow gorse, high above the beaches and coves below, the cliffs we were trailing. 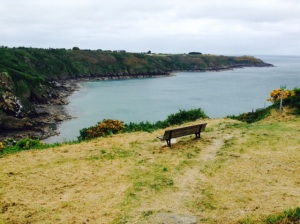 We called in at Pointe Minard, Pointe Bilfot, but decided the road down to Port Lazo might be on the narrow side, so we turned around, only for another Motorhome to shoot on down (so assuming either we were concerned unnecessarily or they’d be doing a few ‘3 point turns’ shortly!!!

In the past we have stopped for lunch at Paimpol, but never explored the town (not perhaps realising there was more to this port!). Our friends have not long visited Paimpol themselves and filled us in that it’s worthy of a more thorough explore, which we have now achieved. Nice little shops and restaurants, some of Medieval origin in fact.

The port is nice to walk around, though the buildings in that immediate vicinity are from a rather characterless age! Sadly all too often as has been French architecture in this last almost a decade! How on earth could they make so many mistakes in recent times having been absolute masters of such exquisite historical architecture.

We parked (as did many other vans) by the old railway line in the heart of Paimpol. It was free, so ideal, though not pretty a spot to be bothered to stay the night there. The regular aire (not that much more inspiring) was being used by the visiting fair.

On our way back to the van we bought a ‘croissant aux amandes’ to share, but little did sharing stop my weight continue to creep back up, as I found out stood on our scales the next morning! Help! I have put on almost 4lbs!!! Time to take myself in hand a bit as I’m supposed to be losing, not steadily putting what I lost all back on!!! Grrrrr!!!! – but only myself to blame!

I don’t think the eclairs from the day before can have helped either!!!