Having now gone seriously off-piste in that I wasn’t using a guidebook, my next objective was to find somewhere to overnight. Turning to Park4night, I could see plenty of options to the West of us, so off we went.

All was well for the first part of the journey, but the last 15k took us back on our dreaded narrow roads. In my defence, I immediately gave Sophie the option to turn around and get back on some sensible roads, but they weren’t precipitous, so she agreed to persevere.

In fact, they were OK, just, it was just that there were a number of herberts just driving too fast round blind bends, when we were having to ease past every car we met. So plenty of hooting, and a modest crawl, brought us out eventually into a stunning mountain landscape, reminiscent of Scotland, not that we’ve been to those parts.

As we approached my proposed Park4night along the valley, I could see that the carpark at Grazalema was pretty full, so not really our cup of tea. We parked up, but I’m not sure if it was the uneven surface, the family next to us with the whistling father, the caravan in the corner with a very loud generator, or the fact that our heads were just a few feet away from rumble strips on the road we were next to, but the writing was on the wall that we’d soon be looking for alternative accommodation.

As it happened, there was a “surrounded by nature” Park4night about 2.5k away, just around the corner, so we upped and went. Another very narrow road, but it was still light and not far. In fact, en route, Sophie noticed a small square carpark, which served a local fountain and accommodated a few cars. Being empty, it was ideal for us, level hard standing and a lovely view across to other mountains. So we were able to put our heads down at another successful free-camp.

After a very peaceful night, we woke up to heavy rain, and after coffee headed on our way. Ironically, I‘d picked up my DK Books’ Back Roads Spain only to find that we’d inadvertently driven into Drive 18 – White Pueblos, and so we picked up the route from where we found ourselves.

After consulting with my road atlas, I reckoned the safest bet would be to head due West to El Bosque. We knew that narrow roads were inevitable so it made sense to find the shortest route out. As it happened the A372 was a bit better than the worst of the previous day’s roads, and the drive more enjoyable. Incidentally, if you do happen to find yourself in a motorhome in these parts, and there are plenty of them, we would say that there are ample free-camping opportunities on the ascent after Grazalema that you won’t find on Park4night.

It was raining when we arrived in El Bosque, so we didn’t give it a visit as such, but we did take advantage of their aire for free water. From then on we were on proper roads again, and I could hear my brakes heaving a sigh of relief.

Continuing almost 30k Westward we arrived at Arcos de la Frontera, where we parked up beside a lake at a Park4night for a spot of onboard lunch. Sophie was keen to try the Lidl frozen risotto with squid and black ink, but after inadvertently burning the pan, the air turned blue, in both senses of the word. Fortunately, the meal was a success, but the saucepan will need some serious cleaning.

We considered parking up outside the town and wandering in, but hadn’t considered that this would involve a significant hike uphill. We hastily decided against it, so headed off, but fortunately our exit route gave us some amazing views of this town high up on its escarpment.

Having wavered as to what direction to travel in next, and seriously considering making a dash for the Portuguese border, my trusty DK Books’ Back Roads Spain made our mind up for us as it sold the Atlantic Costa de la Luz to us.

So, we’re now heading South again in the hope of finding a coastline more pleasing to our exacting seaside taste. On Park4night I’d seen a motorhome, or autocaravanas, service point at a garage, so that was very handy to have it mapped into the journey in advance.

South of Arcos there are not too many Park4nights to choose from, but I’d seen a picnic spot (unhelpfully addressed on Park4night “Unnamed Road

11570 Jerez de la Frontera”, but a long way from Jerez in fact). It’s actually the parking area for the Parque Periurbano La Suara. The only description was “Zona recreativa la suara barbacoas sitio trankilo se puede pernoctar muy trankilo ideal pasear o bicicleta”. Now my Spanish is rubbish, but from what I could decipher, plus the lone photo, it looked ideal, ie large hard-standing area, with a motorhome showing. There were no reviews, which you could interpret either way, so we’ll have to see if we survive the night. We have two neighbours, which is always reassuring.

*** Just to mention that our blogs tend to be a couple of weeks behind reality, as we’re always in catch-up mode *** 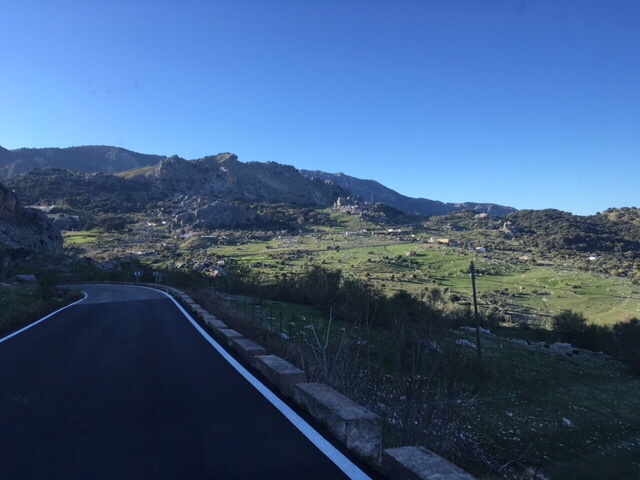 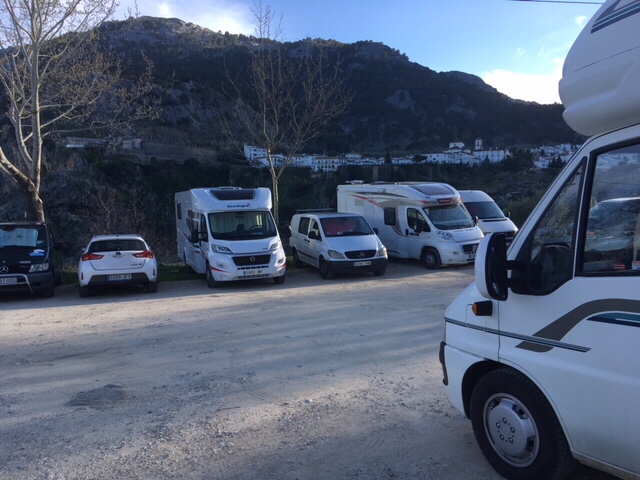 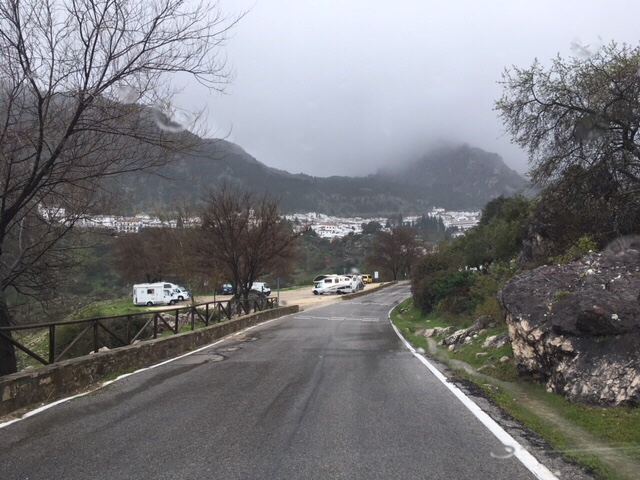 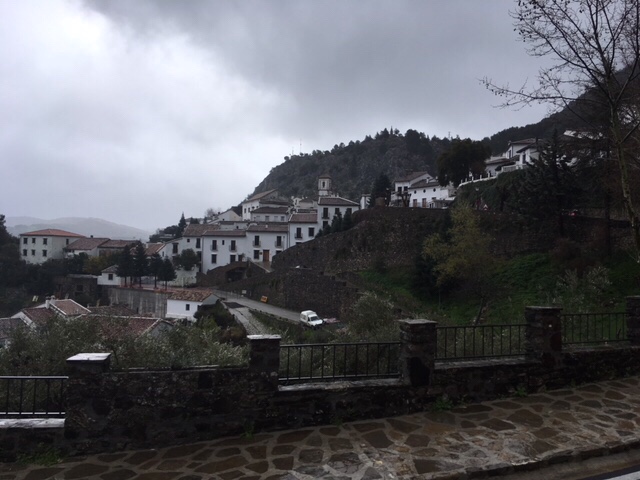 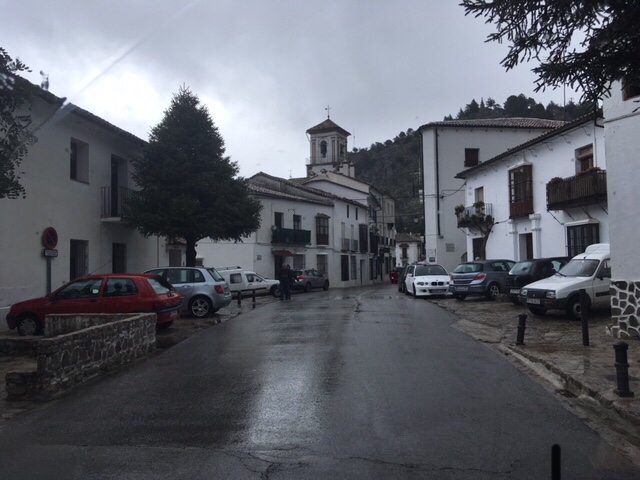 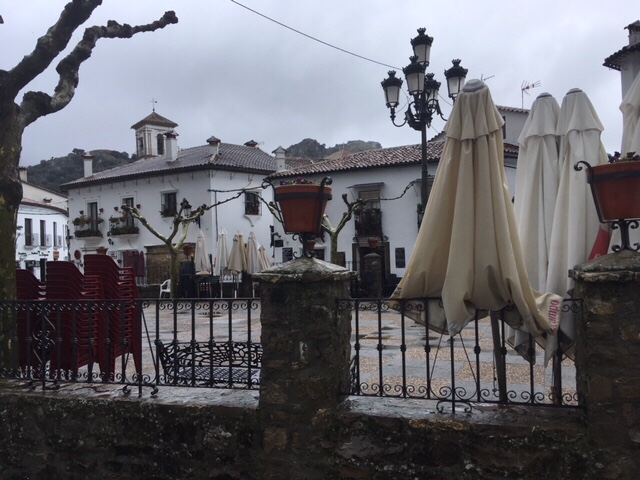 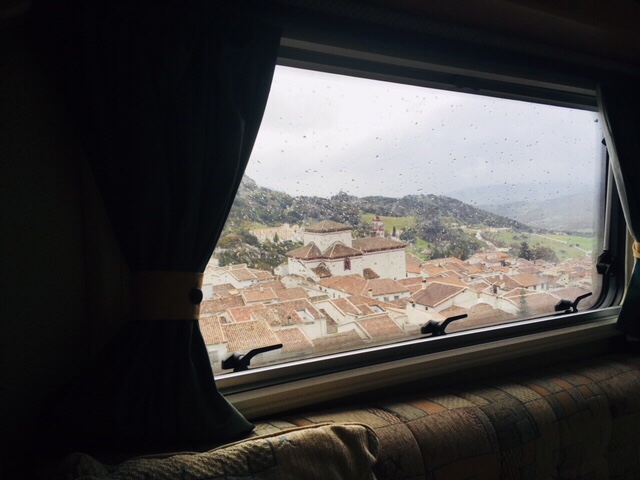 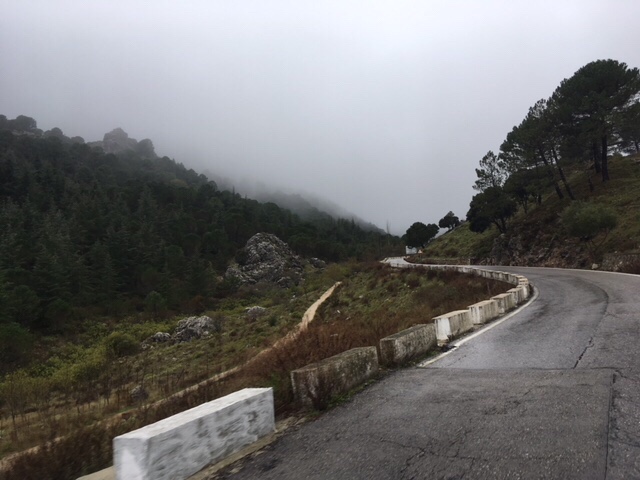 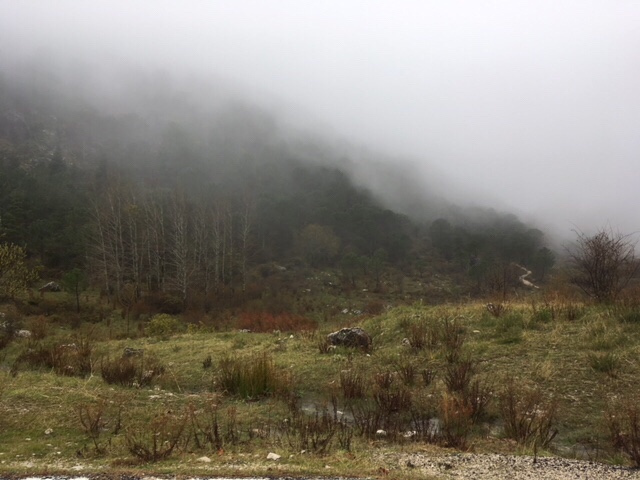 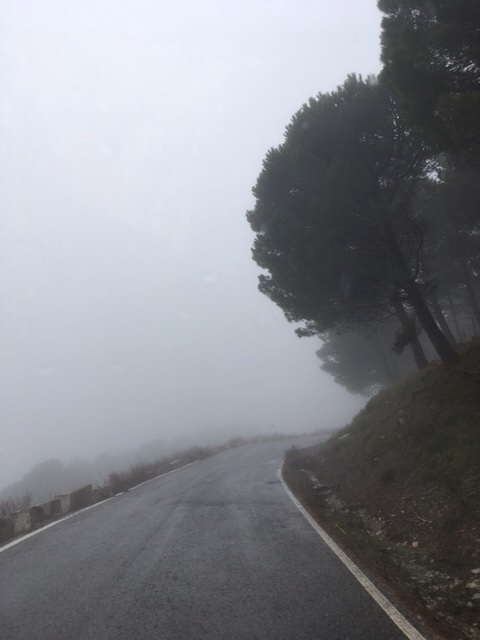 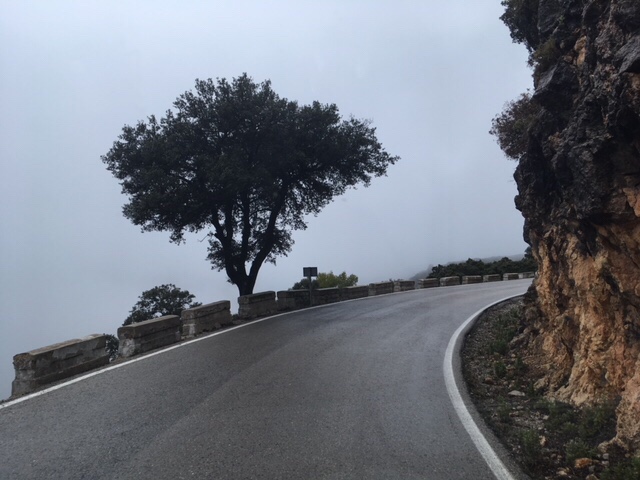 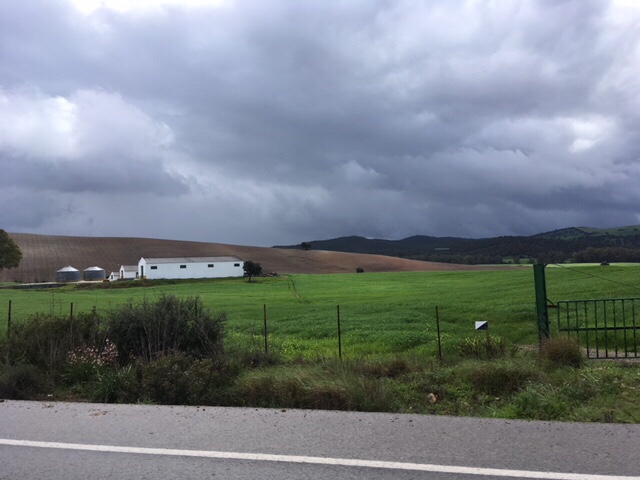 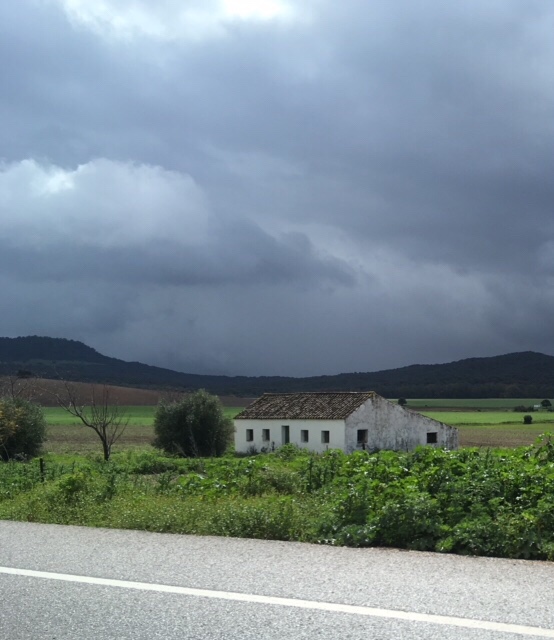 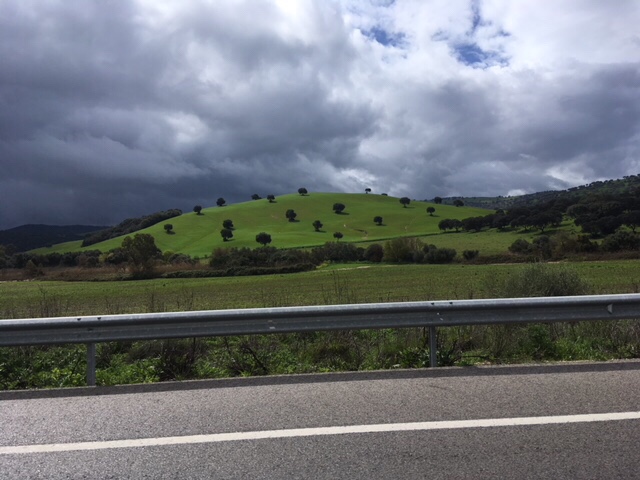 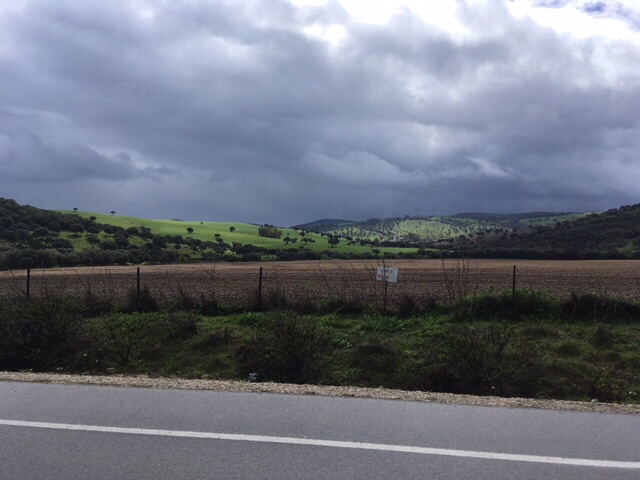 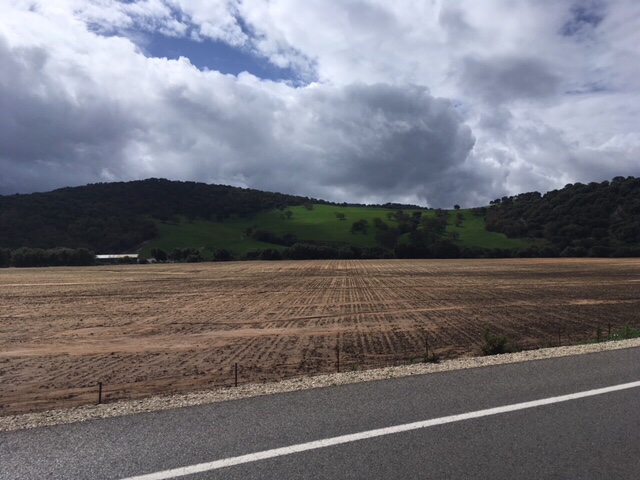 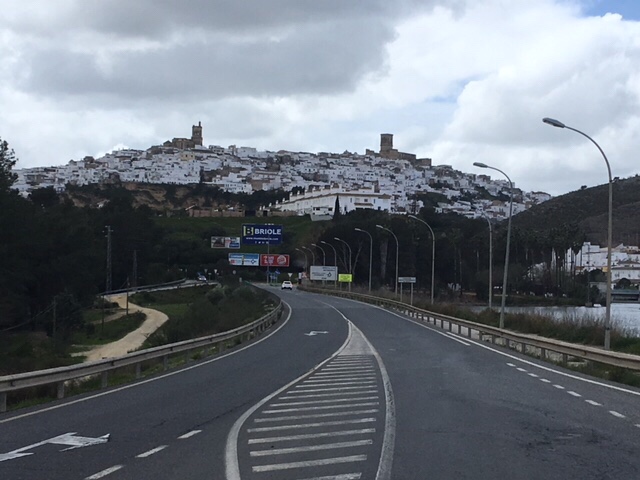 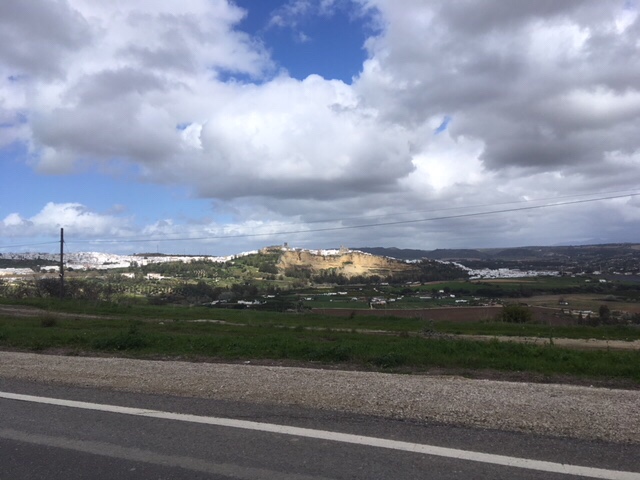 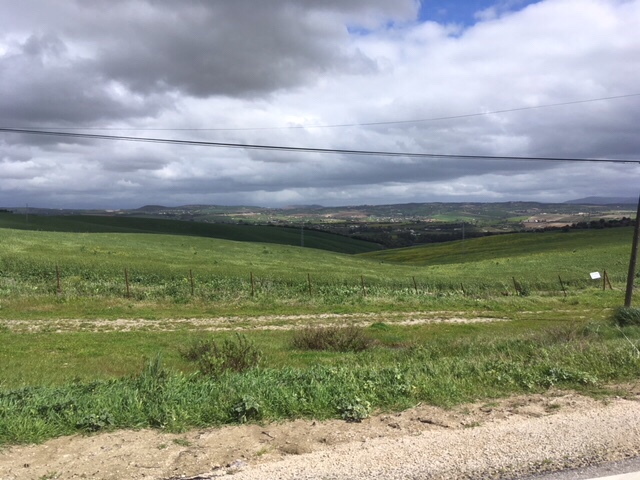 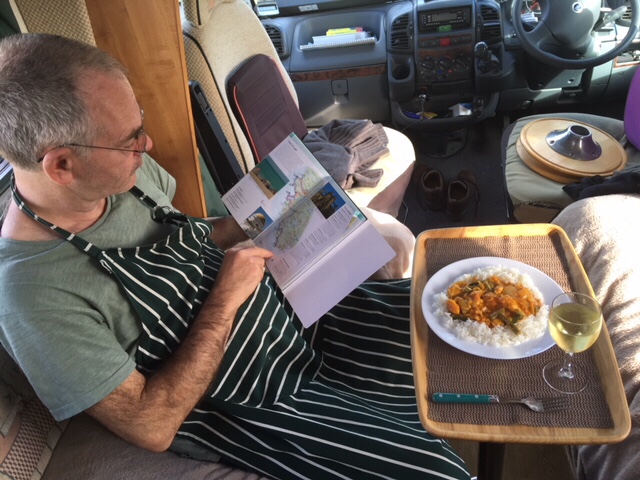 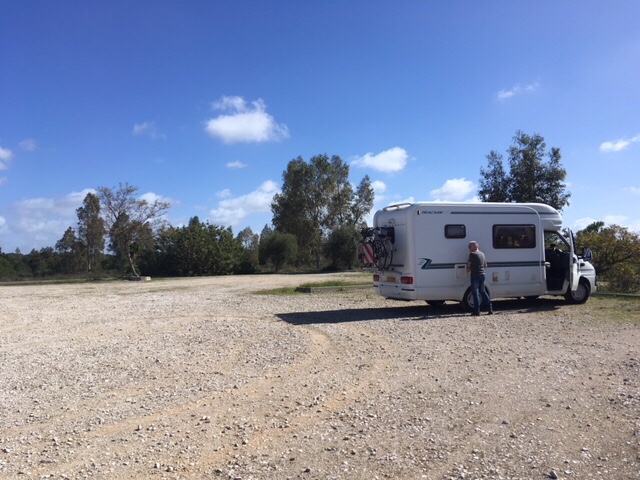 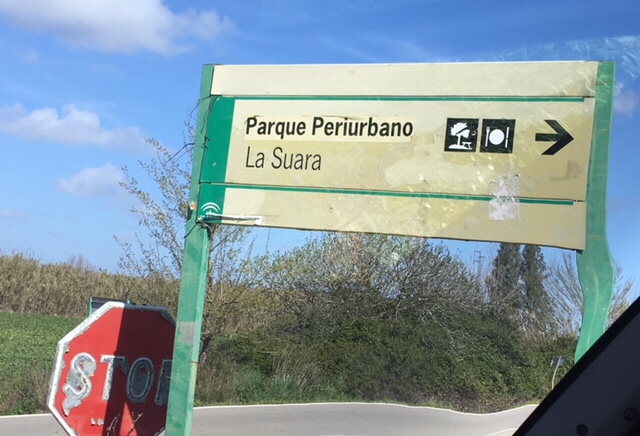 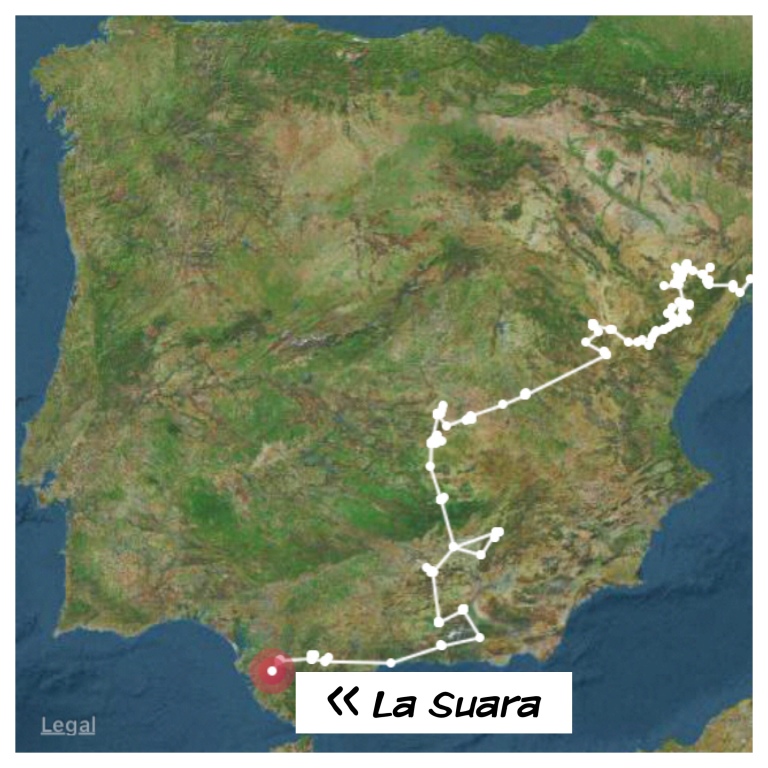