Arrived at the estuary port of Treguier, another boating destination of years past, though only twice, as a good 2 hour trip from Jersey I seem to recall, so just 2 voyages there as opposed to our more frequently visited sea port of Portbail (since visited once via Motorhome!).

Anyway, back to Treguier – decided to park at the port initially, and took a walk over the bridge then cooked up that Ratatouille again! I steamed the butternut slices to have them ready to go in with everything else, and not holding up the works! When you’re hungry, extra waiting around is never welcome! – particularly when you’re in danger of eating anything and everything in sight and regretting it later!!!

Having been at the port a couple of hours by now, Michael getting some work emails done too, we headed to the canal/river side (probably the latter! – not sure), and parked up along with fellow vans.

Having previously checked nothing would fall over from port to aire (just a 2 minute drive), and all secure, we got out our chairs and I dished up the ratatouille (the grated cheese having melted nicely en-route!). An accompanying glass of medicinal/’medicinal’ red wine, a slice of custard tart (tarte au nature), or some such name, followed by a walk. 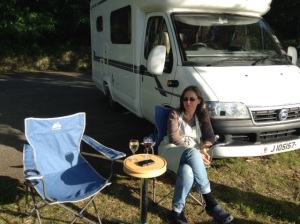 We had hoped to settle down to a quiet evening riverside. Hmmm!!!! Would have too, but for the group of young travellers (Hobo style) who were parked up with their converted lorries, stood around, with loud music, loud voices, too much booze in hand (and who knows what else!) and a certain intimidation to top it all off. Just a total selfish behaviour, lack of respect and disregard for others and made my blood boil!

No-one of course says anything (you daren’t really), but I was blowed if their monopolising presence was going to intimidate me into not taking a walk past them and enjoy the surroundings. So we did walk by, but not uncomfortably close to have to engage in any way!

We achieved enjoying a very pleasant stroll where we hadn’t been before, so that was some consolation – albeit small! 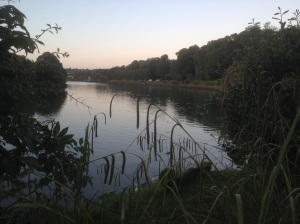 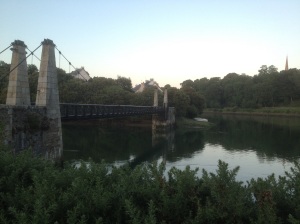 By 11pm we knew we stood to get little sleep, with loud voices, cars speeding past, and their intermittently barking dogs to top it all, so we battened the hatches, and headed away in the last of the evening’s light.

Anywhere would have been better than trying to get a decent sleep there! (well on that occasion anyway). We’ll get back to Treguier one day, and hopefully without the same ‘neighbours’!!!

So, gone 11pm we’re driving with the essential help of our programmed Sat Nav! We were having to follow the ‘Deviation’ signs, but after about half and hour, we pulled in at a ‘Camper Contact’ overnighter stop, which curiously enough was an ‘ecole primaire’ car park. It was totally empty and very welcome, and bar trips to the loo (as annoyingly has become part of our night time routine once again! – and I wish I knew why!), well apart from that intrusion, we had a blissfully quiet night!

In the morning, perhaps half a dozen cars rolled up, but no intrusion on us, so we were very grateful for that little haven stop.

This of course was a free stop! Bonus!