• Last night – walk round the lovely town of Castelnou. Amazing views from our windows

• This morning – same as last night

• Drove to nearby Lidl in Thuir – Yay!

• Drove to nearby olive grower in search of free amenities – Boo! Only sleeping allowed, but tempted to do that nevertheless following a rare poor night of sleep for me

• Arrived in Spain – at last

• Back to awful La Jonquera, with its back to back pitiful prostitutes, no doubt poor girls trafficked from Eastern Europe

• Still in awful La Jonquera, tracked down garage selling “GPL/Autogas”. First struggled with basic Spanish to get the go ahead to pump in the gas. Then struggled with 2 different types of adapters. Struggled in Spanish again to explain this to petrol man, who confirmed, thank goodness, that my adapters were fine. So tried a second time and failed. Exasperated petrol man then tried to do it, but even he failed, so I felt less of a failure. Then he just pushed the nozzle on with brute force and job done. Phew! That was a close shave

• Went in to pay my €5 and met the poor girl who’d been touting for business next to the garage forecourt throughout the whole “GPL” episode. Thought probably best not strike up conversation, although unlikely given my poor language skills. Her lifestyle, assuming it was not her choice, certainly puts my so-called problems into perspective

• Drove away from awful La Jonquera, but the back to back prostitutes continued down the road. I’m sure there must be a lovely part of La Jonquera, but we had little incentive to stay longer than we had to

• Decided to “bank” this as a potential overnight for later

• Decided to visit Costa Brava town of Roses. Quite nice. Found somewhere to park down at the fishing boat end of the harbour & enjoyed the sun whilst watching the fisherman sorting out their nets

• If we were now to see a tax collector, today could have been close to a biblical scene from Jesus’ day

• Drove up to a Park4night vantage point round the corner, where a local man practised his “boxercise” moves and dance with the aid of pounding music & a plastic skipping rope. Very energetic, if not a bit weird. Only marginally less humiliating than Sophie skipping round a Chateau car park. As reviews of car park said it was a popular haunt for the young at all hours & with loud music, we decided against stopping

• Decided, whilst we were in the area to visit well known small fishing town of Cadaquès. A tortuous windy drive then followed. Eventually arrived there but no where to park for motorhomes. Ended up on an open piece of land overlooking the bay, but at the same time not really a view at all. Some Germans in a proper motorhome reassured us that it was OK to park there but the €150 fine for doing so indicated on the sign plus the fact it seemed that most of those there were perhaps borderline living rough, we chose to return to little town of La Peralada
﻿
• Shared a pizza with very nice Sophie salad, plus extra chorizo & plenty of Rioja. Other than a few stray hounds running around the car park, and the very bright lights outside, we’re hoping for a long restful sleep
Progress so far: 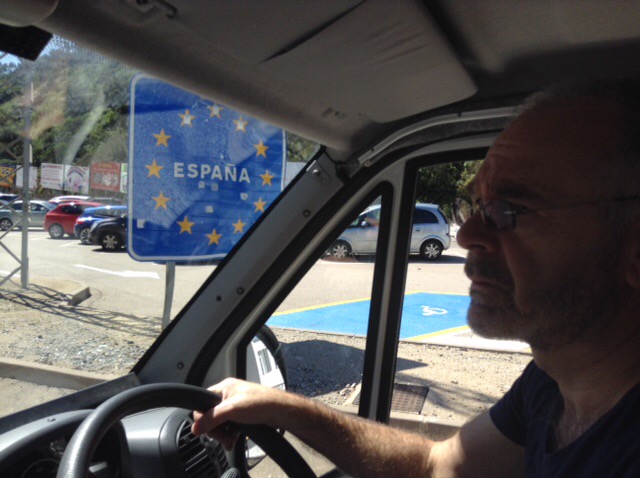 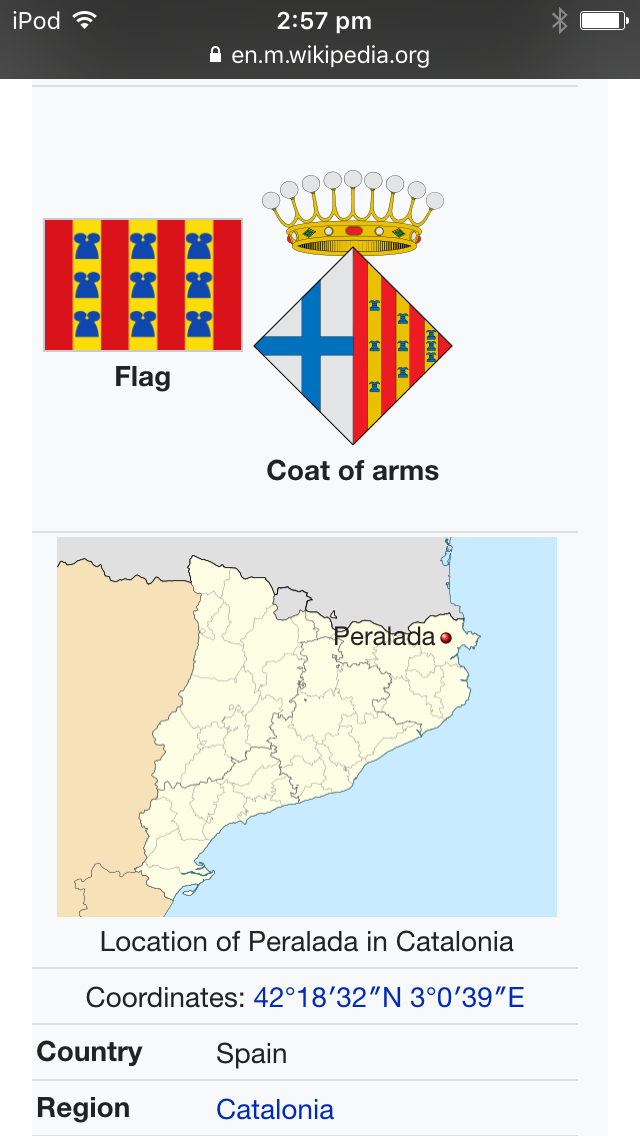 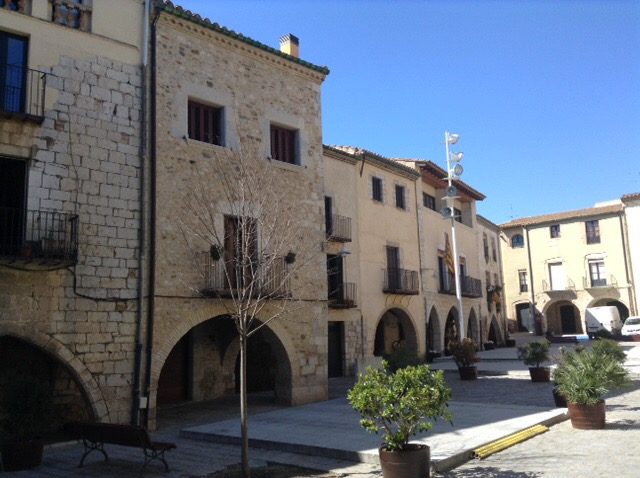 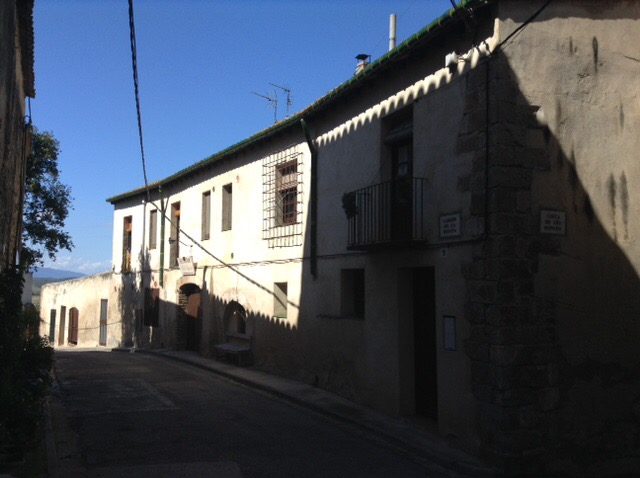 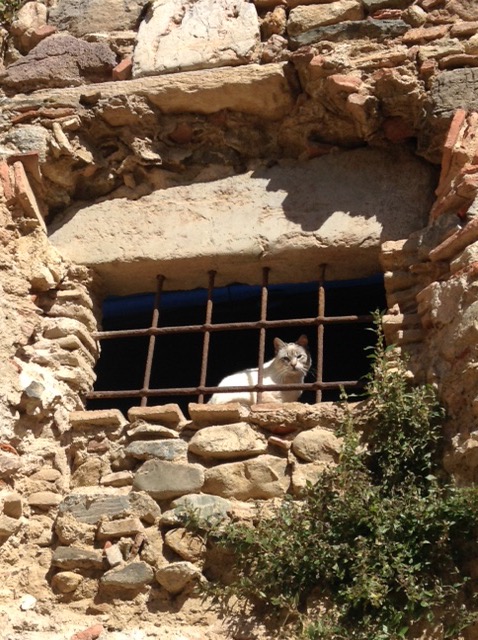 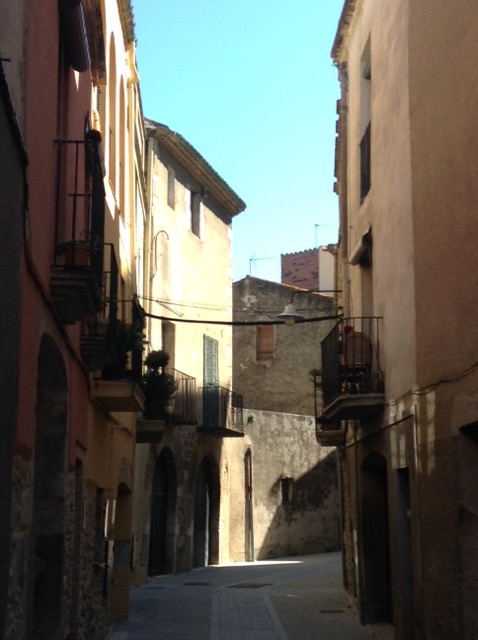 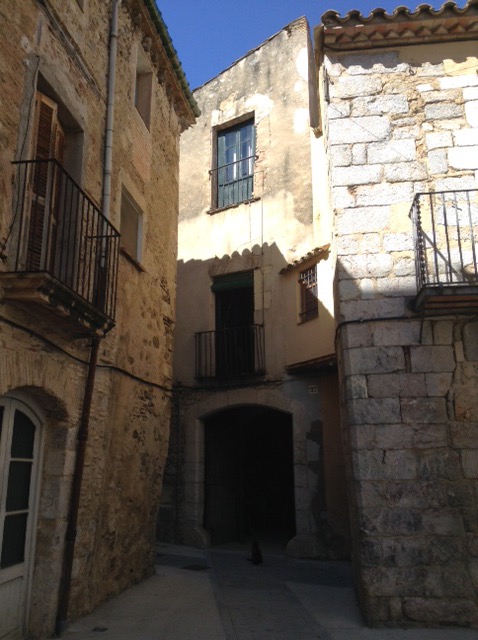 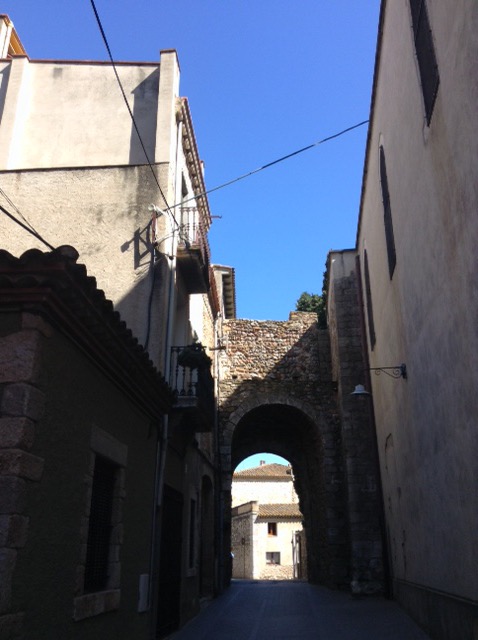 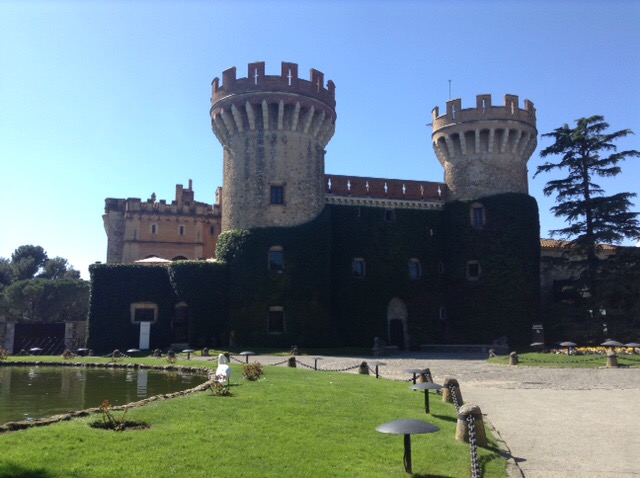 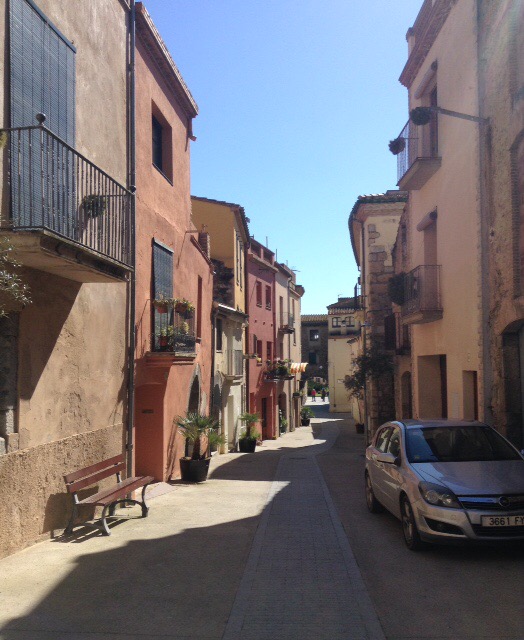 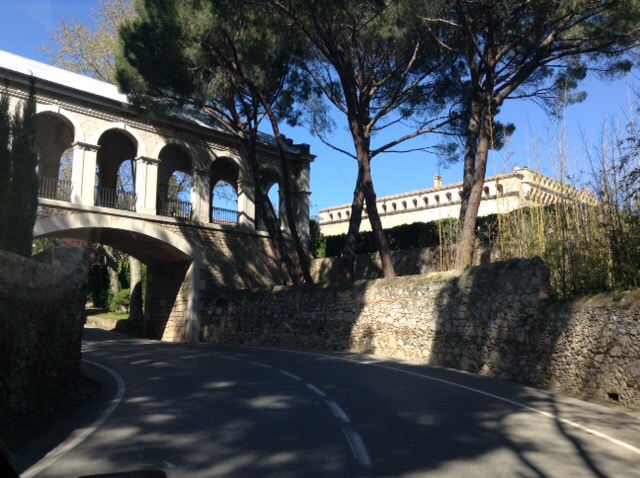 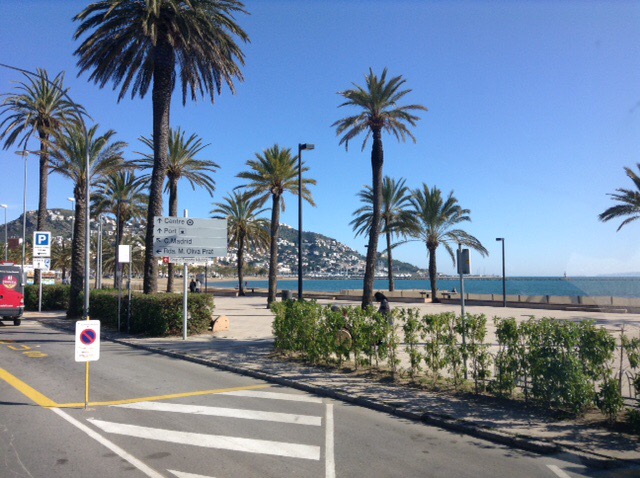 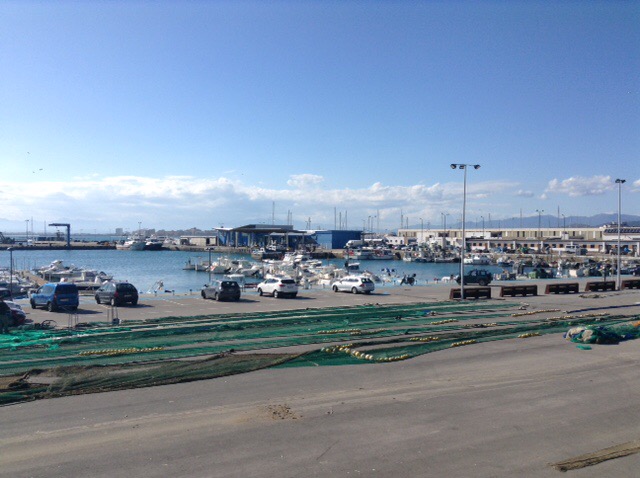 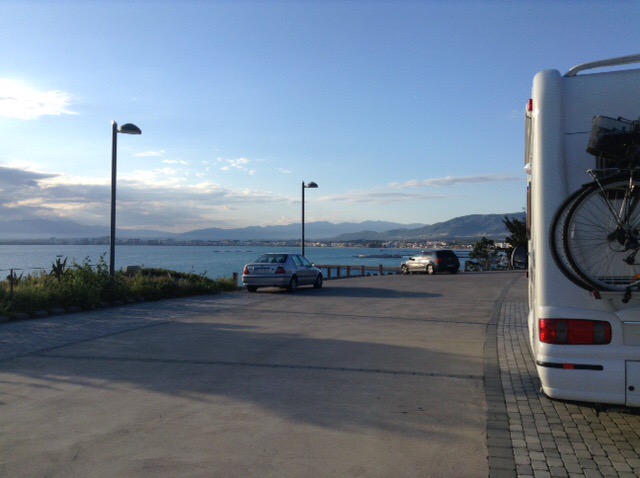 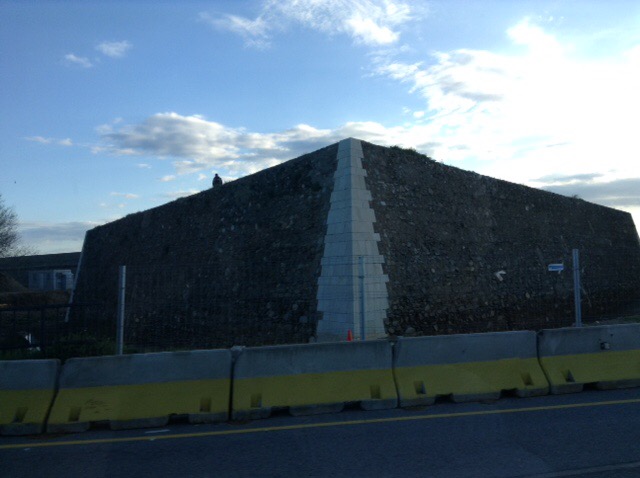 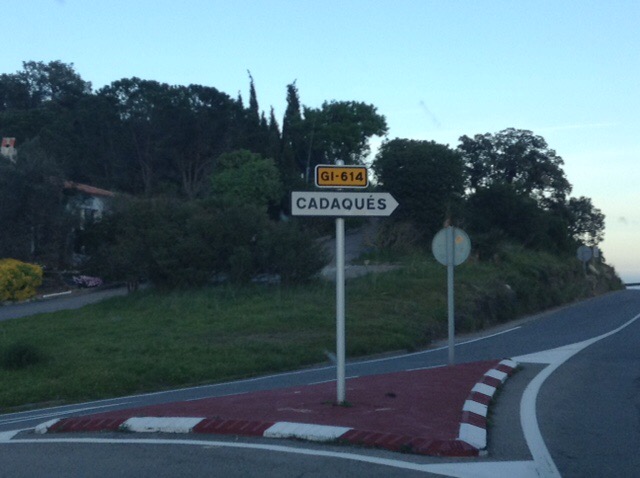 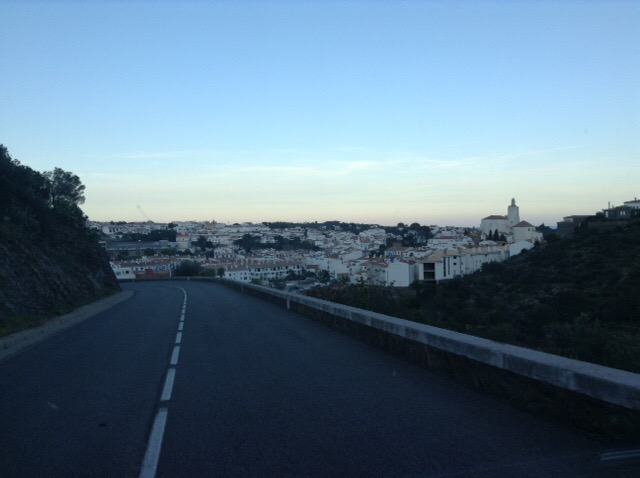 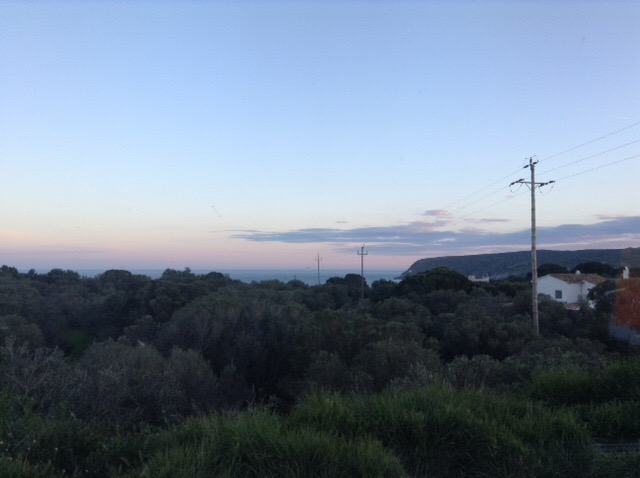 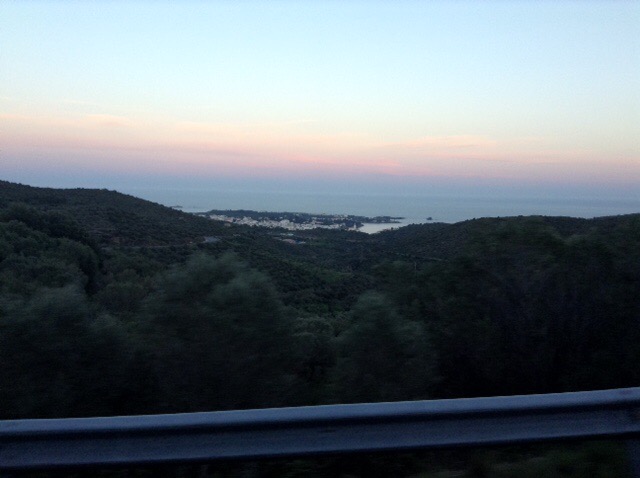 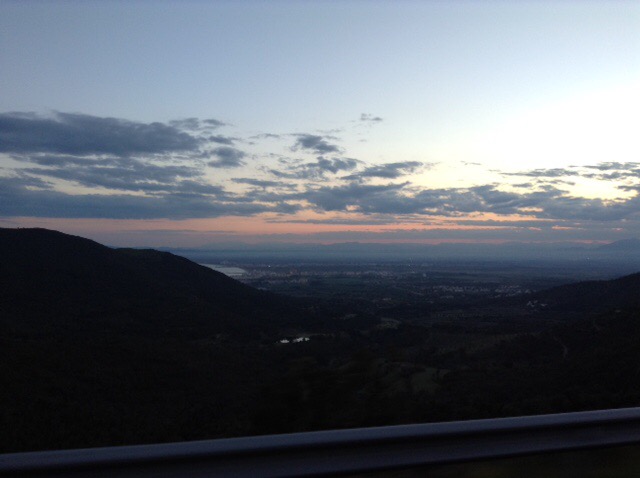