I was keen to get a good value lunch out, but research had not suggested any viable places to suit us in the town where we were, but I had seen great reviews of a restaurant 11k down the road at Le Vid. Le Vid is particularly known for its monastery, and there is really not a lot else there. The restaurant did a set menu of three courses, including water and a bottle of wine, all for €12.50.

I took a photo of the menu and brought it back to the motorhome, where Google Translate converted the photo roughly into English. I think we did a pretty good job of translating and decided to go for it. Sophie wasn’t very comfortable not knowing exactly what might turn up, and in what state it would be, so we agreed that we’d share our courses as required. As you probably know, eating is one of Sophie’s favourite pastimes and she hates the idea of ever being disappointed when it comes to food. Generally, even with a familiar menu, choosing food is a major exercise for her, with much soul-searching and analysis, with back-up plans put in place, which usually mean she gets to swap with me at will.

Anyway, the food turned up and I was delighted with both starters. Lentil soup with chorizo, and a lovely gazpacho type cold tomato soup. I lost the lentil soup to Sophie, but was given a spoonful or two at the end, but minus the chorizo, which I’d been particularly looking forward to.

Second courses were white fish with fried potatoes, and hamburger with deep fried vegetables. The latter was a compromise, a back-up plan for Sophie, but in fact I ended up having to eat most of it. Anyway, once Sophie’d relaxed into the pleasant ambience of the place, the good service, and the excellent company, all was well.

Having noticed that the restaurant had free wifi, after lunch we retired to our motorhome and I set up my portable wifi booster in order to do some downloading of maps and other bits and pieces, which would have gobbled up too much of our own wifi allowance.

Next stop was the larger town of Aranda de Duero, where we stocked up at Lidl after over a week without seeing our favourite shop. After much research I’d found the well-reviewed aire in the town. It was at the side of a carpark, but had plenty designated bays, plus all the facilities, and it wasn’t at all hemmed in by buildings. Interestingly this is the first time so far in Spain we’d seen an aire where the water wasn’t free. They wanted €1, which actually is unnecessary given the freely available water in virtually every village we’ve been through over the last few weeks.

I must admit I wasn’t too surprised when Sophie said that there was no way we were going to stay in a potentially noisy carpark in the middle of a big town, but at least now she’d have to share the blame if we couldn’t find anything. Not even Park4night showed anything viable for a long way. So after using the aire’s free facilities we headed off along the rather lovely touristic route along the Duero river, avoiding the motorway that the Satnav would have preferred we’d used.

The lighting from the slowly setting sun was amazing and the scenery very nice indeed as we drove along with one eye on potential places to overnight. Sophie found a green area near a village, but I wasn’t keen on that one, so we persevered on our tour and search. We finally came to the incredible castle at Penafiel that towers at a very high point over the town. The Satnav was determined to take me down some ridiculously narrow streets, so I ignored her and assumed that we’d only be able to take a few photos and then be on our way.

As it turned out, and after “going round the houses”, the Satnav eventually directed us to the Park4night I’d previously rejected, and immediately we realised that this could be ideal, set just below the castle and right above the town. I then did my usual recce of the area, and noticed that the road up to the castle itself was pretty good and wide. Maps.me showed me there was a carpark right at the top. We had nothing to lose so went for it. As it turned out there were about 15 car-sized marked bays, and whilst Sophie was out and about with her camera, I found the longest one near the castle entrance, and we squeezed in, with just our front tyres overhanging the front, but the road was wide enough to cope.

So this was our magnificent overnight stop, and we only saw one car come up during the evening. So “Park4Larb” number two was chalked up. 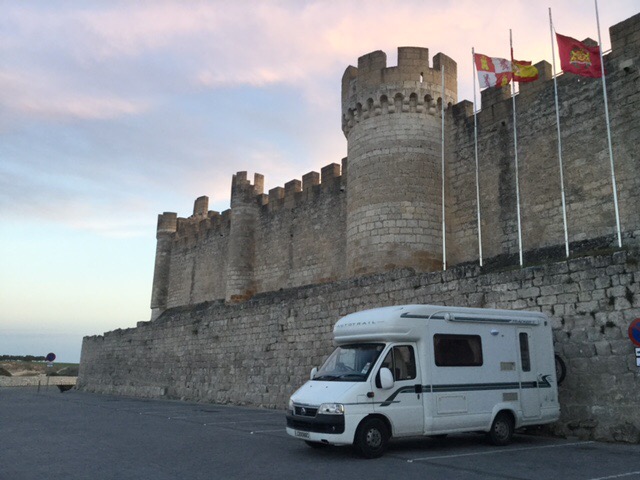 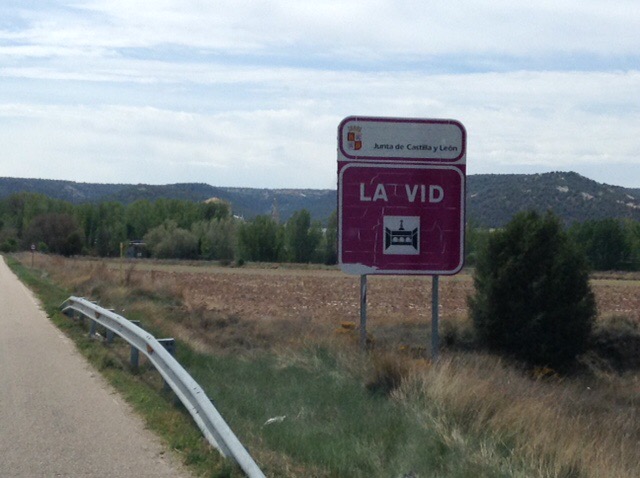 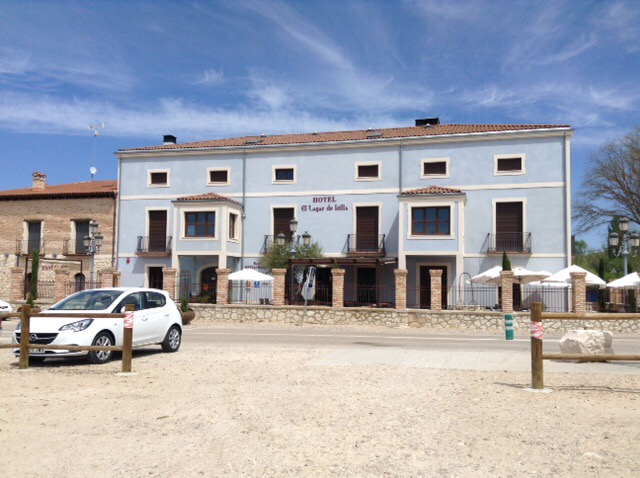 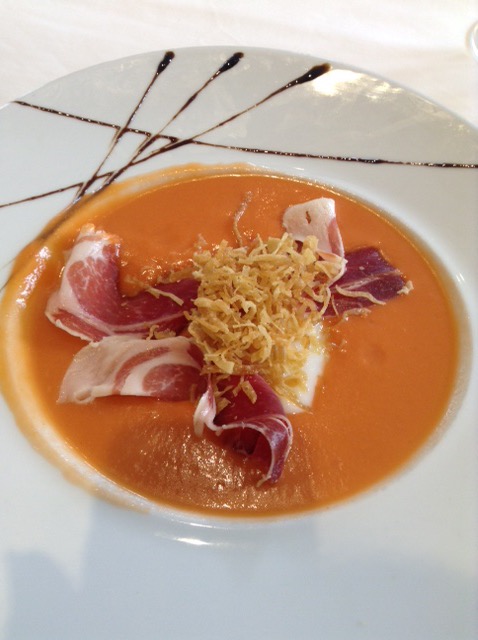 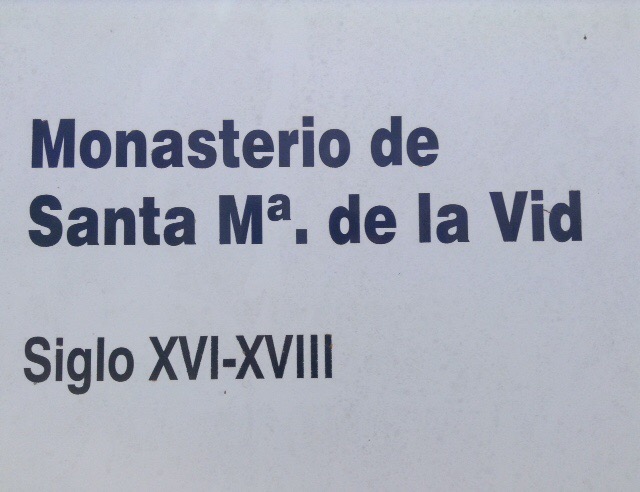 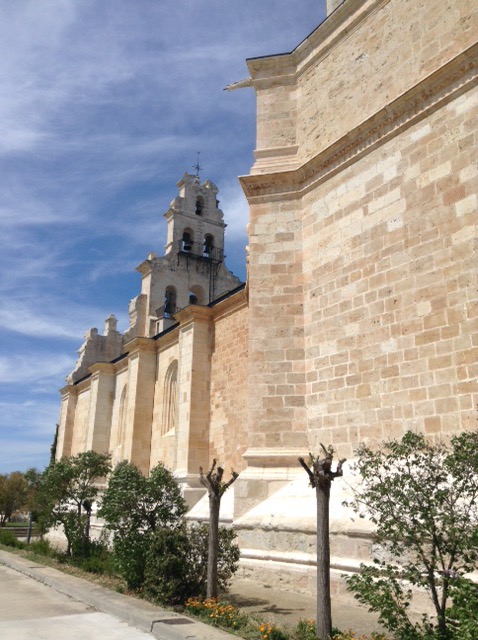 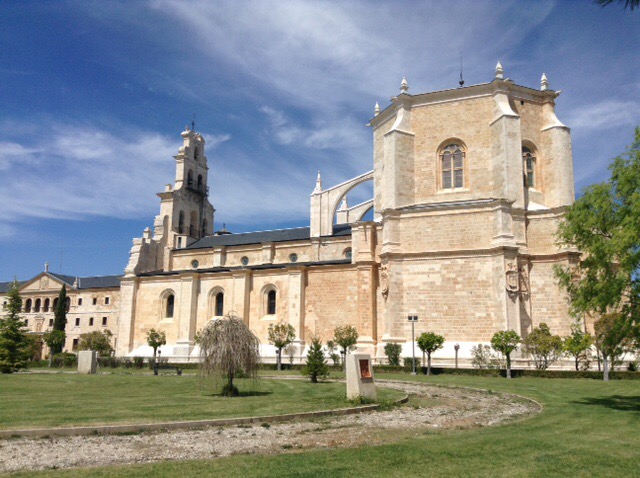 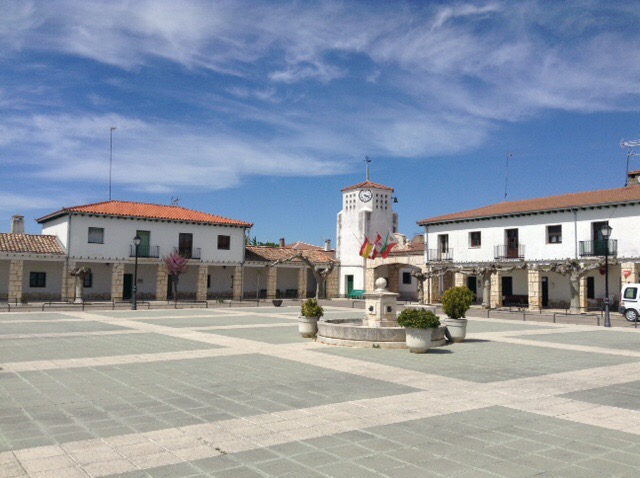 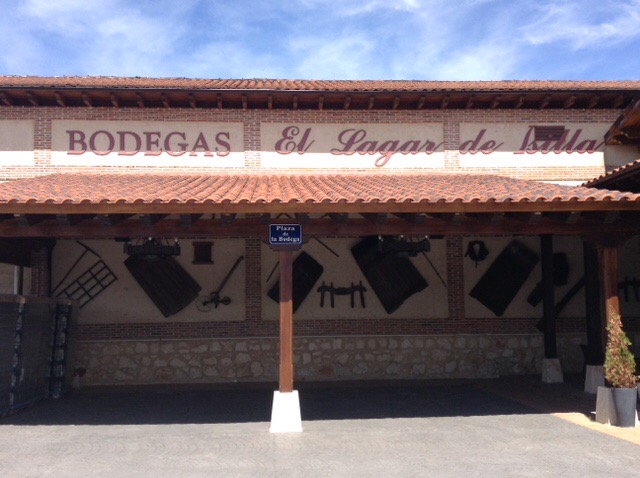 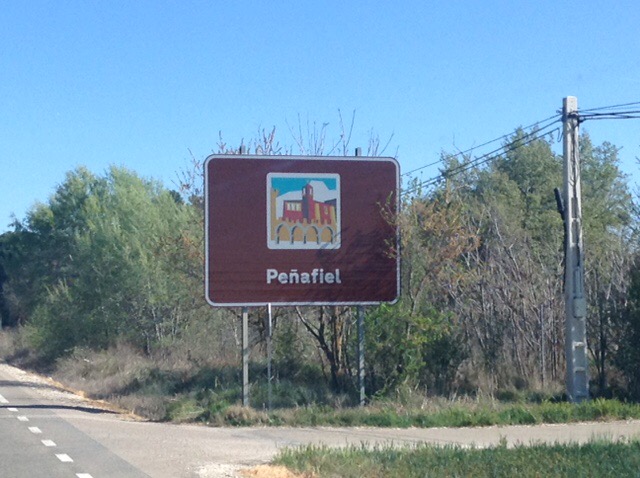 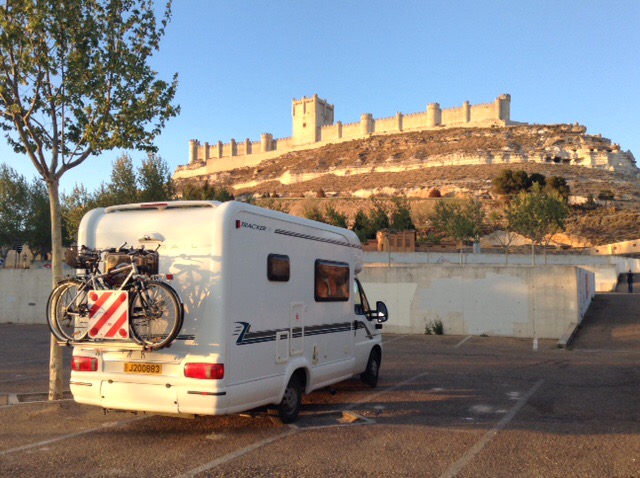 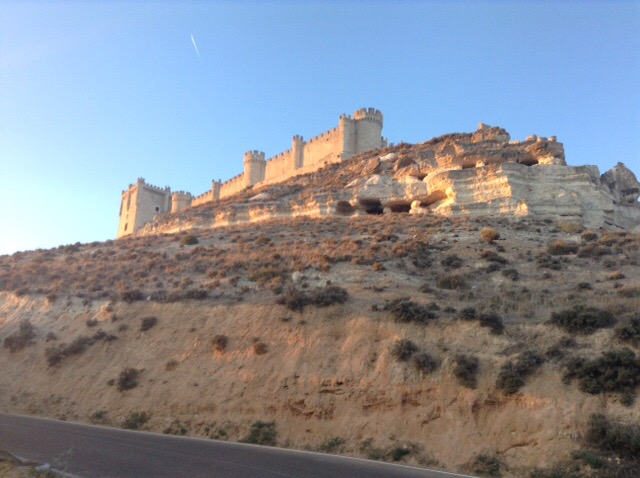 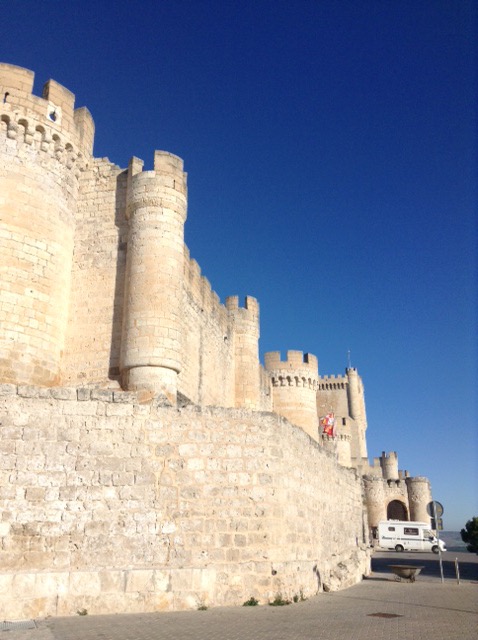 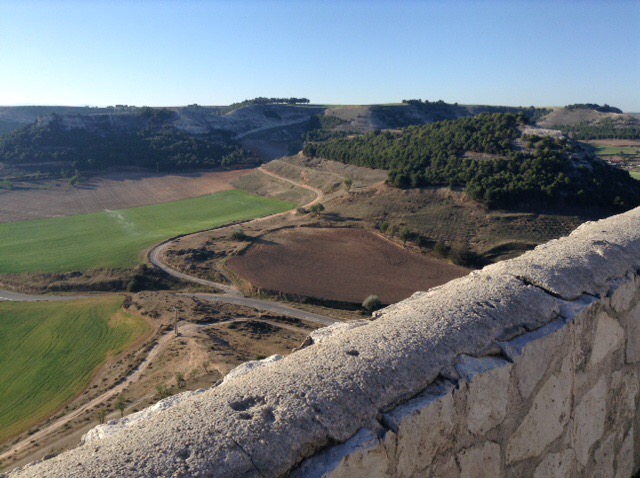 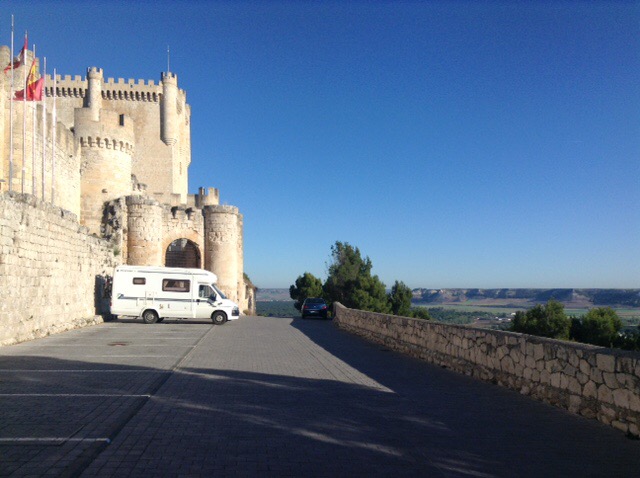 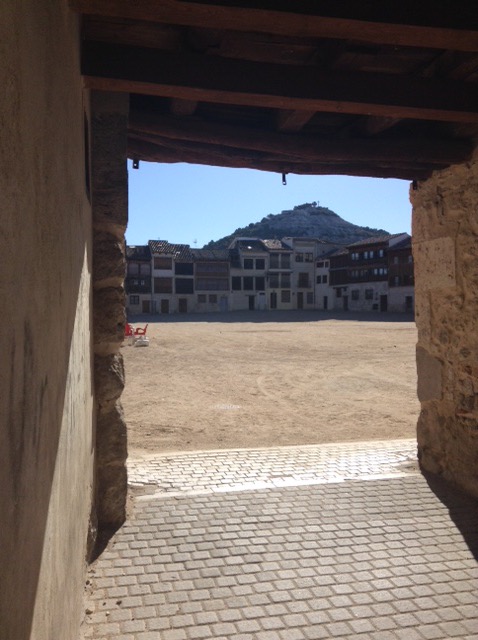 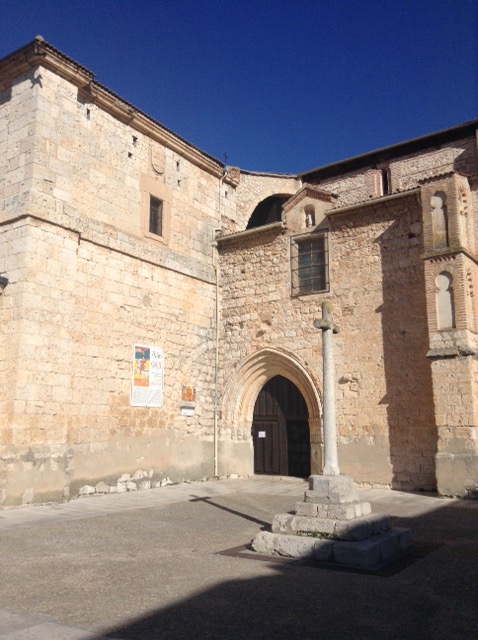 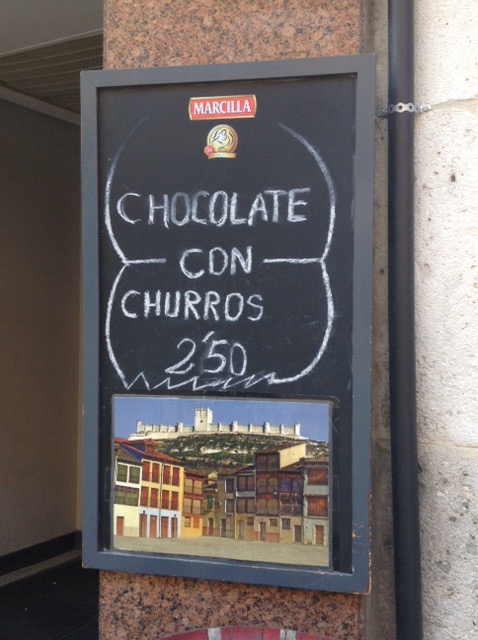 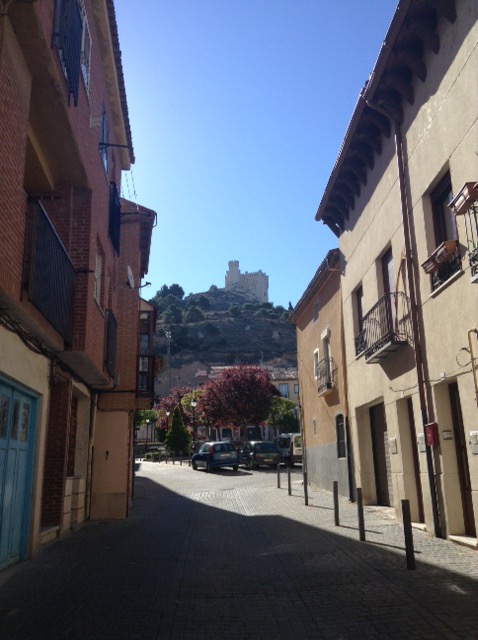